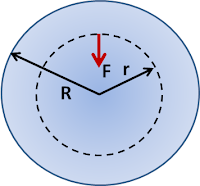 Consider an instant of time when the body is located at a distance r from the center. Let the density of Earth be p. Let the mass of the body be m. The force F of gravity acting on the body will be proportional to the mass of Earth contained within the sphere of radius r, given by,

We also know that at the surface of the Earth the acceleration is g, hence we have,

(3) is the equation of motion of the body and is an example of simple harmonic motion. We know that the time period of oscillation is given by,

The time taken by the body to reach the other side of the Earth is then given by,

The velocity of the body at the center of the Earth is given by,

Posted by Krishna Kant Chintalapudi at 12:43 AM