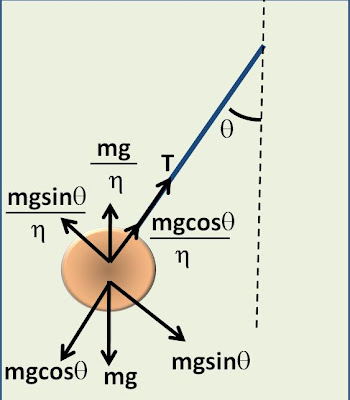 There are three forces acting on the pendulum bob, i) the gravitational force mg, acting vertically downwards ii) the buoyant force acting on the bob vertically upwards and iii) the tension in the string T. Since the density of the fluid is

times less denser, the buoyant force acting on the bob is

. Assuming that the pendulum bob is so small that it can be considered to be a point mass, its moment of inertia about the point of suspension is given by

For small values of

Posted by Krishna Kant Chintalapudi at 6:50 AM